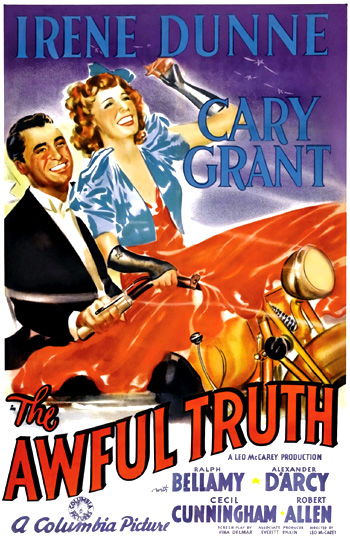 Before their divorce becomes final, Jerry and Lucy Warriner both do their best to ruin each other’s plans for remarriage, Jerry to haughty socialite Barbara Vance, she to oil-rich bumpkin Daniel Leeson. Among their strategies: Jerry’s court-decreed visitation rights with Mr. Smith, their pet fox terrier, and Lucy doing her most flamboyant Dixie Belle Lee impersonation as Jerry’s brassy “sister” before his prospective bride’s scandalized family.

The film was a box office hit. It was nominated for six Academy Awards, including Best Picture, Best Actress, and Best Supporting Actor. McCarey won for Best Director. The Awful Truth was selected in 1996 for preservation in the Library of Congress’ National Film Registry.  Although he was not nominated for an Academy Award for Best Actor, the film was a triumph for Cary Grant. Overnight he was transformed into an A-list leading man.[80] “The Cary Grant Persona”[122] was fully established by this film, and Grant not only became an able improviser but often demanded improvisation in his films thereafter.